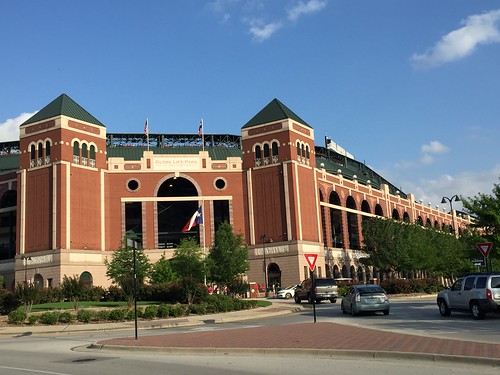 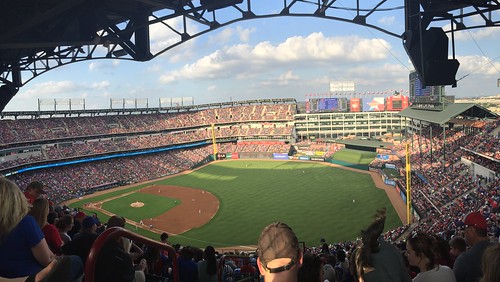 You basically have to drive to Arlington as there is little to no public transportation to the park (-1). There is a trolley (+1), but you have to be in Arlington already to use it. Luckily, parking is plentiful (+1) and fairly inexpensive (+1), but you have to walk a loooong way to get to the park (-1) from the parking lots. In the middle of a Texas summer, that can be rough.

Tickets to a Rangers game are some of the most affordable in baseball (+1). The Rangers are, on average, one of the five least-expensive games to attend in the majors (+1). You get a pretty good view of the game from almost anywhere in the stadium (+1), but the park has more obstructed seats than older parks like Wrigley and Fenway (-1). Very few seats have shade, though, and that can be a huge problem in Texas (-1). Some of the cheapest seats in the park can be had for just over $15, and they have plenty of shade in the nosebleeds and the view is great compared to many modern parks (+1). 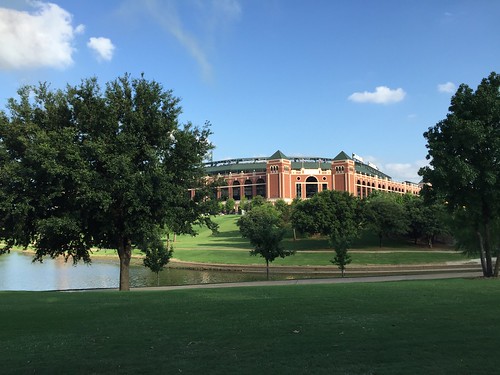 The exterior of the park combines an old-school green-and-brick look (+1) with a huge exterior (+1) and beautiful landscaping (+1). However, there isn't much outside the park to make it stand out (+1). While it does take some inspiration from other stadiums, other than the bigness of it, there isn't anything that makes it unique to Texas on the outside. (-1)

The ballpark is huge, but even with a gigantic concourse, you can't see the game from the concourse (-1). The interior of the park has a lot of cool features, though. The outfield has a porch reminiscent of Tiger Stadium (+1) and bleacher seats. The exposed steel (+1) and green padding (+1) is also a callback to classic ballparks. They used to cut the Rangers logo into the outfield batter's eye grass (+1), but they don't do that anymore (-1). Even though there was an immense amount of land to build the stadium, they still decided on unique outfield dimensions to give the field some character (+1). There is also a three-story Hall of Fame (+1) that celebrates Texas baseball and usually has some exhibits from Cooperstown. 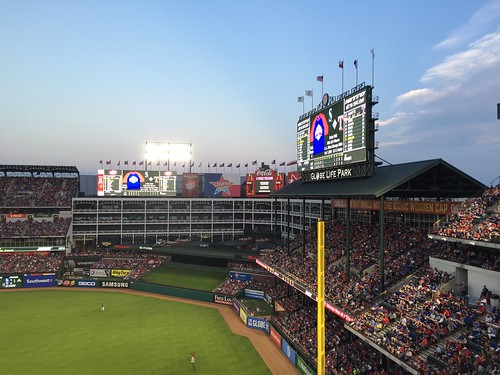 The outfield videoboard was brand new for the 2016 season when I attended a game. It was impeccably clear (+1), and just as big as many in the majors (+1). It is, however, hard to see from some parts of the stadium (-1). You can see out-of-town scores in the outfield (+1) although it's only five games at a time (-1).

Arlington is a great park for kids. The Kid's Zone is an indoor (+1) playplace for younger kids (+1). Did I mention it's indoor and has air conditioning (+1)? They also have mini climbing walls for older kids (+1). Outside the park, there is a miniature baseball field kids can play on if it isn't too hot (+1).

Fans are very friendly (+1) and the Texas accents are a bonus (+1). Yu Darvish was pitching for the first time during the season and everyone seemed aware of this (+1). The Rangers were also within spitting distance of first place in the AL West and fans seemed knowledgeable about the team (+1) and baseball in general. (+1) 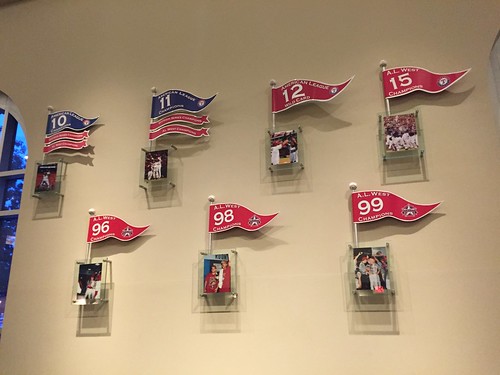 The ushers in Arlington are typically older and exude Texas charm (+1). They are just as willing to talk baseball as many of the fans (+1). Don't expect to trade up early in the game, but if you see an empty see after the 3rd inning you should be able to take it (+1) if it's not an uber-expensive section. You can even watch batting practice from the lower areas (+1) and it's possible you won't get kicked out once the game starts if it isn't a highly-attended game (+1).

The 7th inning stretch at Arlington starts with the traditional "Take Me Out to the Ballgame" (+1). They then play an instrumental version (+1) of "Cotton-Eyed Joe" (-1). As much as I hate the song, I'll give them credit for using a country song (+1), but why not use a song specific to Texas? (-1)

There isn't really much to do around the ballpark. It is surrounded by offices (-1), parking lots (-1), and other sports stadiums (-1). They at least allow tailgating in most of the parking lots (+1).