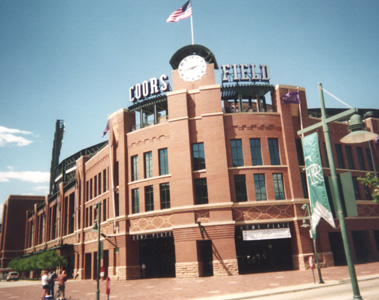 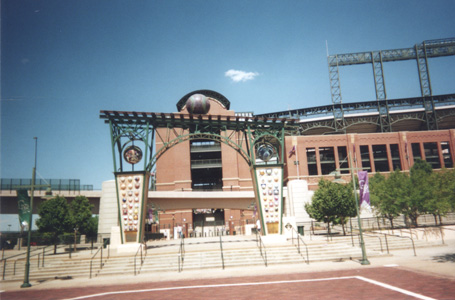 The Colorado Rockies indirectly began life in 1985, when a new collective bargaining agreement between the players and owners paved the way for the National League to add two expansion teams so both the American and National Leagues would have 14 teams. It would be the first baseball expansion since 1977 when the Seattle Mariners and Toronto Blue Jays joined the American League. A number of cities would vie for the expansion teams, which would begin play for the 1993 season. Miami, Tampa Bay/St. Petersburg, Orlando, Denver, Buffalo, and Washington D.C. all wanted their first baseball franchise, or in D.C.'s case their third franchise. It was pretty much assumed that one of the Florida sites would receive a team so it was up to Denver, Buffalo, and D.C. to battle it out for the other. On June 10, 1991 the committee in charge of expansion approved the bids of the Miami and Denver groups, giving birth to the Florida Marlins and Colorado Rockies. The selection of Miami as opposed to Tampa Bay was another slap in the face to Tampa, which had built the Suncoast Dome, a facility that was mostly unused in 1991, in a misguided attempt to lure the Chicago White Sox to Florida. Tampa would eventually get their baseball team, however, with another expansion in 1998 that would bring them the Devil Rays.

The three-round expansion draft was held on November 17, 1992. The draft was unique because it would be the first in which teams from the other league would share in the expansion revenue. Baseball commissioner Fay Vincent declared this, and also said that the American League clubs would also have to contribute players for the draft. Teams were allowed to protect 15 players on their 40-man roster, and after each of the first two rounds NL clubs could choose 3 more to protect, and AL clubs could choose 4 more. Every NL team lost at least one player in the draft, while only 8 AL teams lost players. The Rockies selected Atlanta Braves pitcher David Nied with the first pick, while the Marlins chose Blue Jays' outfielder Nigel Wilson with their opening pick. Other notable players selected by the Rockies included Eric Young from the Angels, Joe Girardi from the Cubs, Andy Ashby from the Phillies, Lance Painter from the Padres, Vinny Castilla from the Braves, and Brad Ausmus from the Yankees. The Rockies also made a big splash in the free-agent market by signing first baseman Andres Galarraga to a multi-year contract the day before the draft. Galarraga would go on to be the team's first All-Star in the team's opening year. The Rockies were managed by former AL MVP Don Baylor, who would go on to win the NL Manager of the Year Award with the Rockies in 1995. 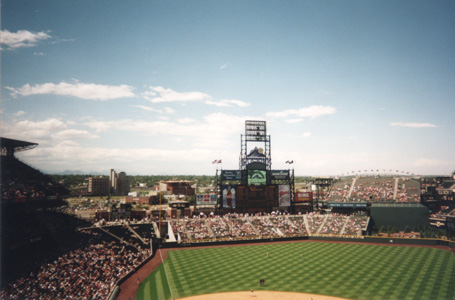 To earn a Major League Baseball franchise Denver had to convince the expansion committee that they had a coherent stadium plan in place. In August of 1990 a referendum for a stadium tax was put before the Denver public. There was token opposition, but with the support of Colorado Governor Roy Romer the opposition, which was unorganized to begin with, could do little to prevent the stadium tax from passing. The Rockies owners began selling season tickets in the late summer of 1991 for the Rockies' opening 1993 season. They also accepted $15 million from minority owner Coors Brewery for the naming rights to the new stadium. The lower downtown, or LoDo, area of Denver was chosen as the site of the new stadium. Construction began in October of 1992 with the target for completion being the start of the 1995 baseball season. In the meantime, the Rockies were to play their home games at Denver's Mile High Stadium, the home of the NFL's Denver Broncos as well as a site for a number of minor league baseball games.

Part of the reason Denver was given an expansion franchise was the stadium deal the owners were able to secure. The seventeen-year lease would give the Rockies all revenue from tickets, concessions, parking, and advertising while the team would only have to pay $3 million to $4 million annually for upkeep and operations. The Denver public was irate at this deal as the original stadium committee had stated that private financing for the stadium could be as high as 50% so the public wouldn't have to foot as much of the bill. People weren't much happier when John McHale, the former chair of the committee, was given a management job with the team. Although the public was displeased with the lease deal, the president of the National League, Bill White, told the Rockies in a letter that the lucrative deal they received was one of the major reasons Denver received the expansion franchise. Just before the Rockies began playing in 1993 the lease deal was amended, most likely because of pressure from the public. The new deal gave the city a percentage of the parking revenues and a percentage of each ticket sold after the first 2.25 million. The Rockies also agreed to pay an extra $500,000 per year for large repair jobs on the stadium. The team agreed to this new deal in part because they had reason to believe they would be making a lot more money than they anticipated.

The Rockies' first season at Mile High Stadium saw the pent-up demand for major-league baseball in Denver come to a head. Attendance records were smashed, thanks in part to Mile High's high capacity of 76,000, and the single-season record of almost 4.5 million fans might never be broken. While Coors Field was under construction nearly 40,000 season tickets were sold for the first season in the new stadium. This led the owners to increase the proposed capacity of the stadium from 43,800 to 50,200 so more fans would be able to attend. Now the stadium had to fulfill its promise of revitalizing the LoDo area of Denver.

During the sales-tax campaign a number of documents proposed that a new ballpark in LoDo would transform the seedy area into a thriving commercial development. Most of the hypothesis in these documents failed to materialize even though Coors Field was a tremendous success for its first few years. Although LoDo did see a revitalization, as it is now considered one of the trendier entertainment areas of Denver, the revitalization began well before the stadium was finished. In fact, the revitalization began in the corner of LoDo that was the furthest away from Coors, and the continued rejuvenation expanded away from the park. Restaurants around Coors actually saw less business during Rockies' home games as their regular customers generally stayed away. However, many Denver fans now appreciate their new stadium as it is hailed by many for it's mix of classic and modern styles, and it's breathtaking views of the Rocky Mountains. 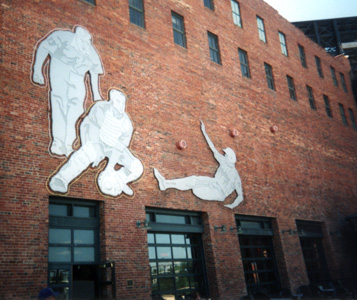 There is a decent amount of parking by Coors Field (+1), and you can even park on the street in some places (+1). The lots around the stadium are some of the most affordable in baseball (+1) so driving is definitely a good option. There are also a number of public transportation options including the train (+1) and shuttles (+1) so there are plenty of ways to get to Coors. You can't really go wrong with any of the options available.

Coors Field has a dizzying array (-1) of different pricing schemes depending on who and when the team is playing. Even though the Rockies follow this annoying trend they make up for it a bit by having pretty affordable tickets (+1). In fact, the Rockies are typically among the top five least expensive tickets in the game (+2).You can even find seats in the Rockpile bleachers even if Abe Lincoln is the only resident of your wallet (+1). Most of the seats in the stadium are very far away from the action (-1), however, which may be the result of the configuration change it went through during construction.

Coors Field is one of the most pleasing ballparks in the majors from the outside (+1). The red brick structure (+1) looks like it has been in the LoDo neighborhood forever (+1) and the streets around the stadium are lined with plenty of trees (+1). The main entrance includes a classic looking analog clock (+1) that gives a touch of old-school baseball to one of the newest franchises in the majors.

The inside of Coors Field continues the red brick (+1) look from the exterior architecture, and a great view can be had of downtown Denver (+1) as well as a breathtaking look at the Rocky Mountains (+1). The bullpens are covered in greenery (+1) and there is a nearby waterfall (+1) to add to the natural feel. The stadium can feel pretty cavernous (-1), but overall it's a beautiful park inside.

The Rockies' scoreboard isn't one of the biggest in baseball, but it has a good amount of stats available (+1) and a cool analog Rockies clock at the top (+1). The video isn't nearly as nice as newer stadiums, though, and has really started to show its age (-1).

Coors Field has a playground for kids (+1) and you can even see the game from it (+1). They also have a restaurant called Buckaroo's that has kid-sized portions of baseball staples (+1).

The Denver fans seem pretty laid back (+1), and there were only a few instances when they really seemed into the game (-1). One of those was Larry Walker's 300th homerun (+1), which was a cool feat to see. There wasn't much trash talking going on because, as I said, the fans seemed really laid back.

The ushers at Coors are really friendly (+1). They answer even the most mundane questions with a smile on their face (+1). They seem to frown upon trading up (-1), though, which doesn't make all that much sense given that the tickets are so cheap.

The stretch is pretty common at Coors Field with "God Bless America" (+1) and "Take Me Out." (+1) They don't really do anything outside of those two staples, but at least they stick with the tradition.

There is a lot to do outside Coors Field (+1), including a huge array of watering holes (+1). Blue Moon was first brewed at the stadium itself (+1) so it's got that going for it. The stadium may not be in downtown Denver, but LoDo is still a great area to hang out after a game (+1).