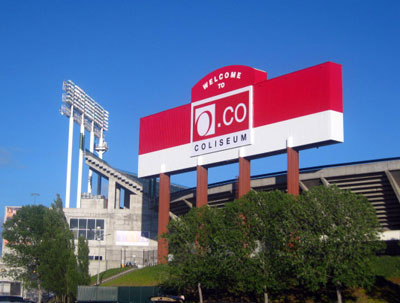 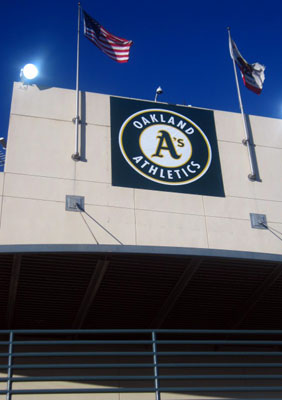 While the Coliseum isn't located in the nicest area there is ample parking around the stadium (+1) and, unless you are crossing the bridge from San Francisco, the commute is fairly easy. They even have free parking on Tuesdays (+1), which makes driving an even better option. You could also take the BART (Bay Area Rapid Transit), which takes you directly into the stadium complex (+1). The Capital Corridor train also goes directly through the stadium complex (+1) and you can also arrive by bus (+1). While the Coliseum doesn't excel in many areas it certainly has transportation down cold.

The Coliseum has some of the cheapest tickets in baseball (+1), although they do charge more for "premium" games (-1). The best box seats can be had for less than $50 (+1) and very good seats can be purchased for around $30 (+1). There are even incredibly cheap seats in the outfield that are normally less than $10 (+1). In addition, every Wednesday they sell those seats for $2 each (+1), which is a bargain we took advantage of.

There is absolutely nothing outside of the Coliseum that distinguishes it (-1). Even bland stadiums such as RFK Stadium had something outside to make them stand out. The Coliseum is contained within a larger complex of stadiums and there is a lot of bland concrete (-1) with little exterior decoration (-1). There is a small garden with plaques commemorating past A's champions (+1), but little else. 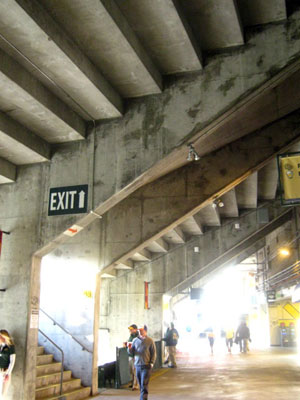 The first thing that strikes the eye when walking through the Coliseum is all the concrete (-1). I don't know of a stadium that has been built without using concrete, but when it stands out as the most striking feature of the stadium's interior you know something is wrong. The interior reminds me more of a college football stadium than a baseball stadium (-1). The seats, even the good ones, can be at awkward angles compared to the field (-1) that can make it difficult to judge fly balls and the luxury boxes that were added for the Raiders in the outfield, dubbed Mt. Davis after the Raiders' owner by angry A's fans, makes it so there is no view of anything other than empty seats and concrete within the stadium (-1).

The Coliseum's scoreboard really shows its age. There is a color video screen at each side of the stadium, but they pale in comparison to newer HD screens (-1) at places like the home of the White Sox and Nationals Stadium. There is a scoreboard next to each videoscreen and they are each an old-school dot-matrix scoreboard that harkens back to an era of stadiums that many would rather forget (-1). You aren't going to see a lot of stats anywhere (-1). The only plus is they have a manual out-of-town scoreboard in the outfield to see the results of other games around the league (+1).

Every Sunday, kids 14 and under can run the bases (+1). Other than that, there is nothing for kids at the stadium (-1). Younger kids especially will find nothing available for them (-1). If you plan to go with young kids, you'd better hope they have the attention span to watch a bad baseball team for three hours (-1). 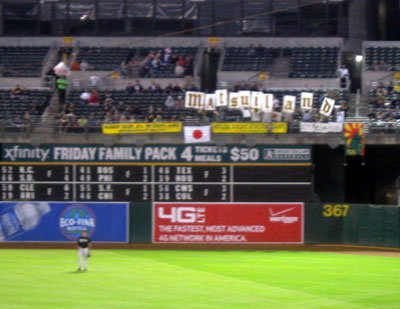 I will start by saying that A's fans seem to be pretty passionate about their team (+1). There was tailgating in the parking lot right up to the 1st inning (+1), which I hadn't seen at a baseball stadium aside from Miller Park in Milwaukee. The fans who showed up to the game seemed to be into it (+1), and there were some interesting signs complaining about owner Lew Wolff (+1). The problem was the number of fans who showed up was pretty abysmal (-1). I had never seen a baseball stadium that empty before (-1), and it's a shame since the Oakland fans will definitely support a franchise as can be seen with the Raiders. The stadium may have a lot to do with why fans fail to show up to games.

The ushers at the Coliseum were some of the worst I've seen (-1). They were pretty adamant about keeping people out of the box seats (-1) and they guard every aisle with a vengeance (-1). Somehow we were able to sneak in and establish ourselves in the 1st inning (+1), but nearly every inning after that we saw someone kicked out of our section (-1). I can understand that practice early in the game, but they kept it up throughout the late innings (-1). With such an empty stadium shouldn't you be a little lenient to those fans who actually paid to see an A's game?

Although there is no real organ (-1), the 7th Inning Stretch at the Coliseum is pretty good (+1). While the fans were singing they had a hula-hoop contest to see if some fans could hula hoop through the entire song (+1). It was a fun addition to the stretch (+1) and was a pretty apt one for California (+1) even if it didn't necessarily fit Oakland. Oakland also plays Oakland-native M.C. Hammer's "2 Legit 2 Quit" during the middle of the eighth inning (+1).

The Coliseum is right there with the White Sox home for having a dearth of options after a game (-2). There is an Irish pub within the stadium (+1), but other than that you are better off heading across the bay to San Fran (-1).