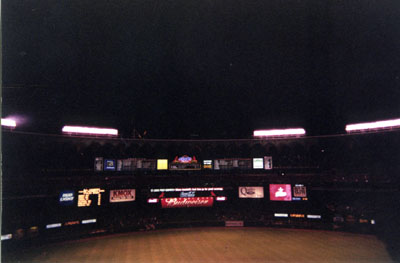 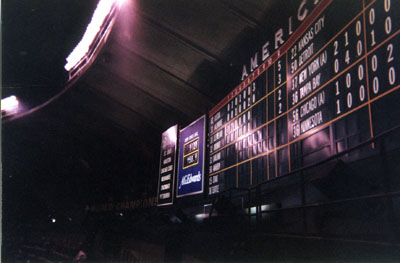 Busch Stadium is bordered by I-64 (+1) and I-70 (+1) and there is plenty of parking (+1) so a car is a pretty easy option. There is also a Metro stop (+1) just outside the stadium. Parking isn't the most reasonable in the league, but at least it is plentiful.

The tickets are fairly expensive (-1), which is what you would expect for a good team in a baseball city, but Busch, which helped start the trend of the cookie cutter stadium, is not the best place to watch a game. The seats are all fairly far away from the action (-1), and the upper deck is the highest I have ever seen (-1). The atmosphere is great (+1), but it has nothing to do with the stadium.

The arches at the top of Busch Stadium are a great nod to the Gateway Arch (+1), and there is a statue of Stan Musial (+1) surrounded by Cards' pennants (+1). There are other statues of Cardinal greats (+1) as well as some greenery (+1) to make the outside of Busch Stadium one of its best features.

You can't walk the concourse and still watch the game (-1), which is typical of older stadiums. The stadium is also really bland on the inside with very few distinguishing features (-1). This is pretty common for the cookie cutter stadiums, unfortunately. 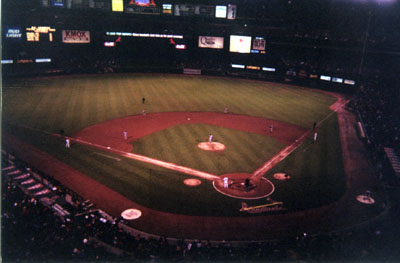 There are two big scoreboards (+1) that are covered with more advertising than information (-1). The videoboard is so hard to see it is almost pointless to even have it (-1). The saving grace is the classic out-of-town scoreboard that follows the style of the scoreboard at Wrigley (+1).

There isn't too much for kids to do at the stadium besides watch the game (-1). There is a small area for kids (+1) but there isn't much there (-1). It's pretty typical for an older stadium.

Cardinals fans are the most hardcore in baseball (+1). I don't think they even allow you in the game if you aren't wearing red (+1). Somehow I snuck in with my Cubs jersey. They know a lot about baseball (+1) and are hanging on every moment of the game (+1). It helped that they were in a playoff race with the Astros in the last week of the season, but I'm sure the fans are into the game no matter what the situation (+1). 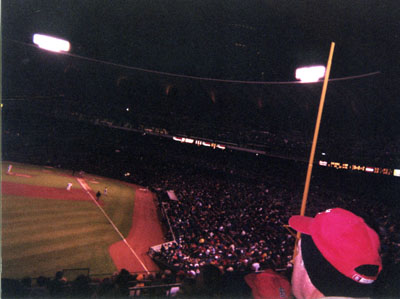 Trading up is tough when the stadium is packed (+1), but the ushers won't let it happen anyway (-1). There still have that nice Midwestern attitude about them (+1), but trading up is still a no-no.

Busch Stadium is one of the few places other than Wrigley that has guest singers for the 7th inning stretch (+1). I don't think they do it for every game (+1), but it's nice to know it's done somewhere else.

Busch Stadium is right in downtown St. Louis (+2) and is within walking distance of plenty of places (+1). Many great spots are within 2 or 3 blocks of the stadium (+2).