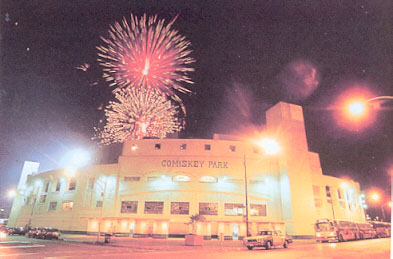 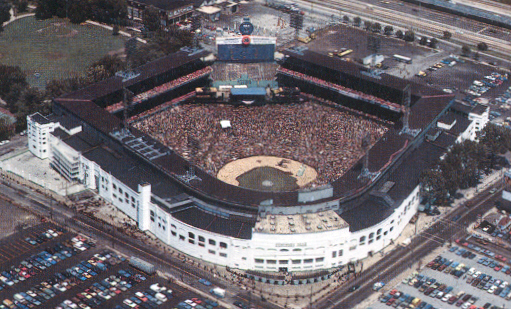 There was plenty of parking by Comiskey (+1), and it was easy to get there taking the Dan Ryan Expressway (+1). You could also have taken the Red Line of the El (+1) that, just like the stop at Wrigley Field, would drop you off considerably close to the stadium (+1). There were shuttles and other public transportation options as well (+1).

Tickets at Comiskey were always fairly reasonable (+1), and the White Sox always had great promotions and discounts (+1). The park was also a great classic ballpark (+1) and had an intimate atmosphere (+1) that doesn't exist in newer parks. Apart from a few obstructed-view seats (-1) you got a great view from pretty much anywhere (+1).

Comiskey Park was a beautiful classic ballpark (+1). The red and white brick (+1) was complemented well with the green steel (+1) inside the park and the main entrance, while not as cool as the entrance on the north side of town at Wrigley, was pretty majestic (+1).

The inside of Comiskey was not nearly as cool as the outside, unless you count the scoreboard (+1), which was epic (+1). The inside of the stadium was pretty simple (-1), but the atmosphere made up for it (+1).

The exploding scoreboard (+1) was a Bill Veeck invention (+1), and was the coolest scoreboard in the majors (+1) before the advent of HD video screens. They tried to mimic it at the new stadium, but it isn't nearly as impressive (+1). It also incorporated fireworks a lot earlier than other parks (+1).

As an older stadium, there wasn't much for kids to do at the stadium besides watch the game (-1).

Even though they don't always turn out for games (-1), White Sox fans are pretty knowledgeable (+1). Just like the fans across town it isn't uncommon to see fans standing in their seats in the early innings (+1), and you can talk to just about anyone (+1) and they will have a good amount of knowledge of the game (+1). They aren't always the nicest when you show up to the game wearing a Cubs' jersey, but whose fault is that?

The ushers were pretty nice (+1) at Comiskey, and trading up was a pretty common occurrence (+1). The Sox fans were considered more working class (+1) so if there were empty seats anyone was welcome to take them (+2). Things have changed a bit at the new park, though.

While the practice of the 7th inning stretch didn't start at Comiskey (the origins of it are actually unknown and widely debated) Harry Caray (+1) began to lead the crowd in the stretch at Comiskey, and that earns it major points (+4).

Going to Comiskey Park meant going to see a baseball game. There wasn't much else to do in the area after a game (-2) and there still isn't now with the new park.