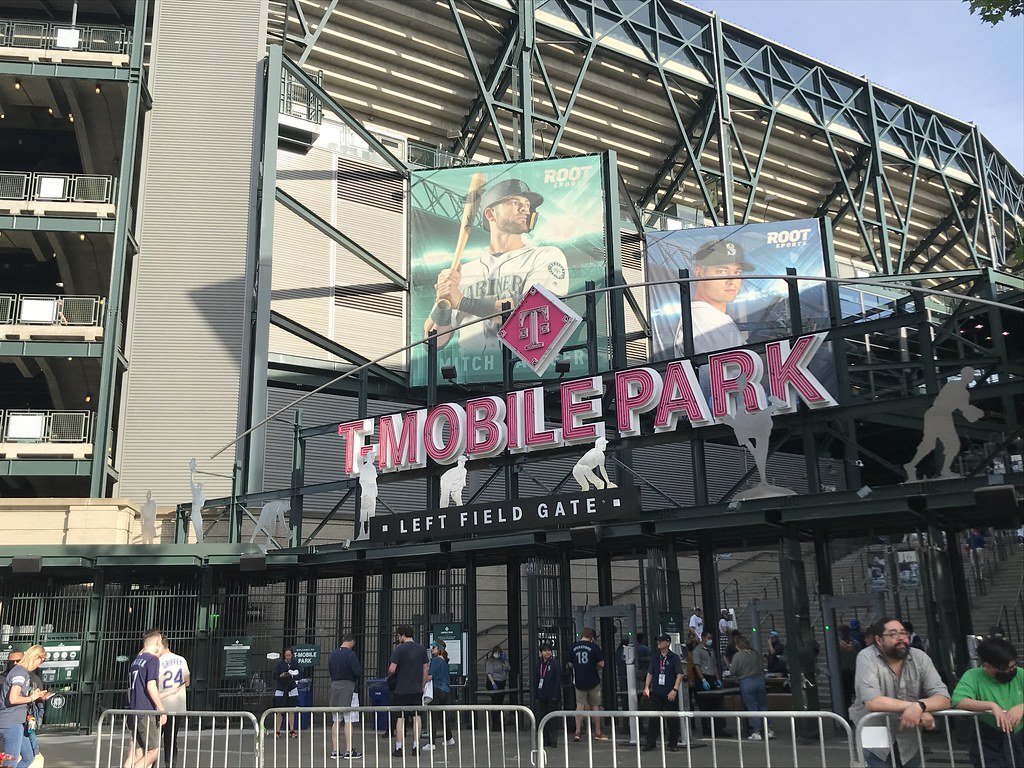 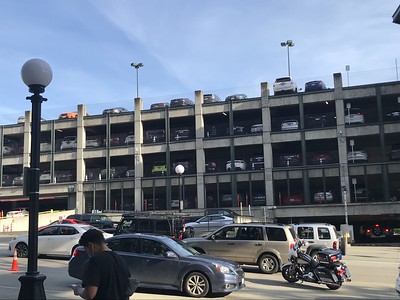 There is a Link light rail line that runs right past the park (+1) and the summer I saw a game they even let people ride for free (+1) . That is really the only public transit option, though. Most of the SpotHero parking is closed for night games (-1) and the official parking garage forces everyone to back in, which slows the entire process (-1) . I understand the rationale behind making everyone back into their spots since it makes it easier to leave, but the process isn't as organized as it could be. The people who direct cars into spots don't help direct the cars that are backing up so anyone who is uncomfortable backing into a parking space can really slow things down. It's a weird process that has some potential if it were better organized.

Tickets were cheap when I went because of a discount they were giving to people vaccinated for Covid-19 (+1), but in general ticket prices are in the lower third of the league (+1). The sitelines are pretty good throughout the park (+1), but the stadium it can be hard to see fly balls from the lower decks if they are under the overhang of the upper deck (-1), a problem that is unfortunately pretty common with modern parks.

The retractable roof over the field looks impressive (+1), but it dominates the whole park and totally overshadows the retro feel they tried to go with (-1). The metal steelwork that is used to support the roof just doesn't look like it belongs (-1). I also found out that it actually rains less in Seattle than it does in other MLB cities such as Chicago during the summer, so the roof wasn't even necessary (-1). The building is tall and uninspiring from the outside (-1). It is cool that when the roof is closed, the stadium is still open to the air (+1).

The inside of the park is just as non-descript as the outside (-1). There are some pretty good views of downtown Seattle (+1), but other than that there is nothing special about the inside architecture (-1). The stadium is built right next to train tracks, but no effort was made to incorporate that into the design, either inside or outside the park (-1). You might not even realize the tracks are there unless you approach from the east side of the stadium. One positive aspect of the stadium is you can see the game the entire time you are walking on the concourse (+1). This is a common feature in newer stadiums and should almost be a requirement at this point. 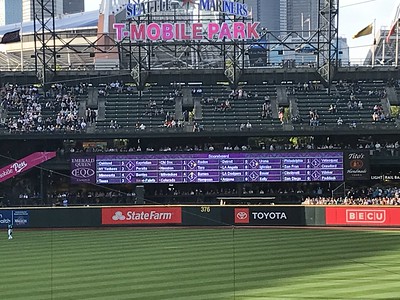 For a somewhat older stadium, Seattle has a great scoreboard (+1). The board is large and clear (+1) and has all the stats you could ask for during the game (+1). There is an out-of-town scoreboard (+1) that has a lot of games, but not all of them (-1). For some reason, even though the out-of-town scoreboard can rotate games, it continues to show the same games which means I had to check my phone whenever I wanted an update on the Cubs game. Not sure why they can't rotate through all the games in play, but it's a pretty minor quibble.

Seattle's stadium probably has more to do outside of the baseball game than any stadium I've seen (+1). There is public art EVERYWHERE (+1) and while that may not be interesting for kids, their Hall of Fame is one of the best I've seen (+1). There is a playground (+1) although it was closed because of Covid-19 when I went. I don't believe it's free, though (-1). There is also a speed pitch game and an opportunity for kids to take pictures with the team mascot, Mariner Moose (+1). 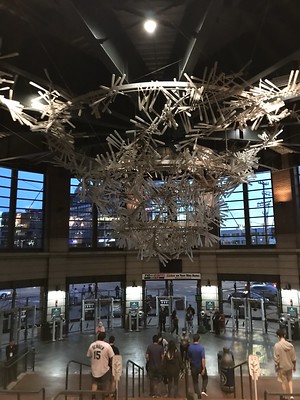 I'm not going to totally judge the fans based on the game I attended since Seattle hadn't yet allowed full capacity games when I attended. The fact that there were so many fans, though, was fantastic (+1). While Seattle fans sometimes get a reputation as casual late-comers, I didn't see that when I attended (+1). People must have been desperate to see live baseball or the reputation just isn't true. There seemed to be a lot of out-of-town fans where I was sitting, but it sounds like Seattle usually sees fairly packed houses (+1), especially when the team is doing well.

The ushers seemed pleasant enough (+1) and it does seem that the whole ballpark is accessible regardless of your ticket (+1). Ushers will obviously not allow you into the lower decks early in the game, but they don't seem to care later in the game (+1). One couple near us did try to move within the same section to an area with less people, but got quickly scolded by an usher (-1). I know it was still early in the game, but the stadium wasn't at full capacity so it didn't seem like a problem.

The fans seemed to be into the stretch (+1), although at partial capacity it was hard to tell. After "Take Me Out to the Ballgame," they play "Louie Louie" by the Kingsmen, which has apparently been a tradition at Mariners games since the 90s (+1). I was wondering if the Kingsmen were from Seattle, but they are from Portland. The Pacific Northwest connection is enough for me, though (+1).

The Pyramid Alehouse is really the only restaurant/bar of note around the stadium (+1). There is a prominent flooring store and a strip club, and a lot of commercial properties (-1). It reminded me a lot of the area around the White Sox stadium before it got built up over the years. Seattle's stadium has been around for decades now (-1), though, so it's a shame there isn't more to do directly by the stadium.