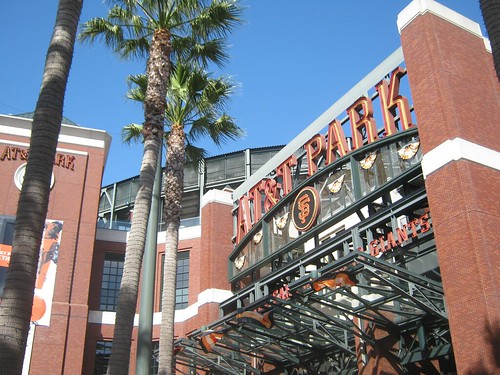 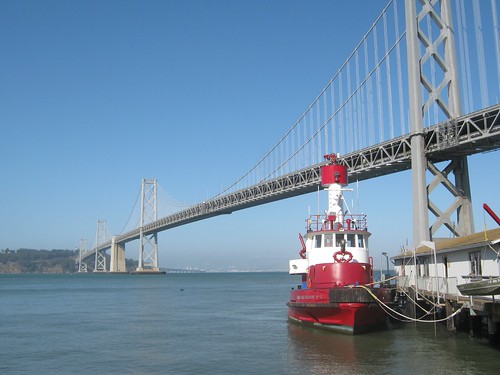 AT&T Park has more transportation options than most ballparks (+1). It doesn't have as much parking as most parks (-1), but when you're in San Francisco you should expect that green transportation is your best option. BART and Caltrain provide rail options to the park (+1) and you can also find more unique options such as streetcars (+1) and ferries (+1). Parking further north on the pier and walking to the park is also an enjoyable option if you have the time (+1).

San Francisco's tickets are fairly expensive compared to other ballparks (-1), but most of the seats offer great views of the game (+1). The bleachers are a great spot to watch the game (+1) and there are few spots in the park that have even partially obstructed views (+1). The Giants institute a market-based pricing scheme (-1) like most parks in baseball so more desirable games are more expensive. Even though the tickets are expensive, the park offers some of the best views in baseball (+1). 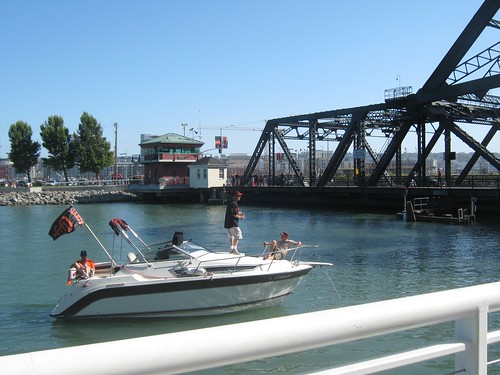 The red brick and green accents of the ballpark have some similarities to Fenway Park (+1), but the similarities end when you approach the bay-side of the park. The bay-side of the park takes advantage of its proximity to McCovey Cove in the San Francisco Bay and is close enough to allow for "splash hits" (+1). Numerous palm trees will make sure you know you're in California (+1) and an analog clock is reminiscent of classic ballparks (+1). AT&T has one of the best ballpark exteriors in baseball and it's a great place to hang out even if you aren't going to a game (+1).

McCovey Cove can be seen from anywhere in the park (+1), except the bleacher seats. The views get even better the higher you go so nose-bleed seats get the off-setting benefit of fantastic views (+1). Like most modern stadium you can see the game from most of the concourse (+1), but the concourses at AT&T seem to be much more narrow than those at most parks. This makes walking around a little more cramped than normal (-1). There is a lot to do inside the park itself so if the game doesn't interest you something else probably will (+1). The bay breeze can make things incredibly cold, even for San Francisco, so pack an extra jacket or two. 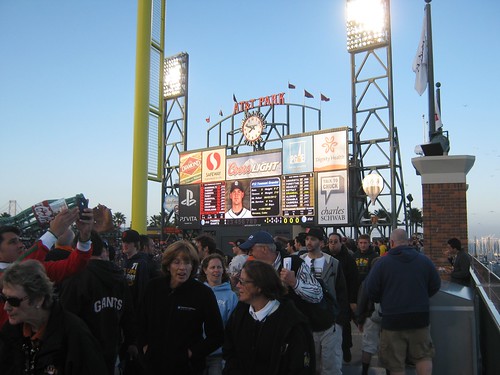 The scoreboard fits in with the stadium architecture (+1) and has a nice analog clock to harkens back to classic parks (+1), but overall there isn't much that stands out about it. It is not as crisp as some of the newer HD boards such as the one at Nationals Park and it doesn't have the classic appeal of parks like Wrigley. There is an out-of-town scoreboard, but it can be difficult to see from most places in the park (-1). Overall, the scoreboard is one of the few downfalls of the park.

The fans are very into the game (+1) and don't arrive as late as fans at other California parks (+2). The only thing they didn't get into was the 7th Inning Stretch, but that's typical of a lot of stadiums. The fans are extremely knowledgeable about baseball (+1). 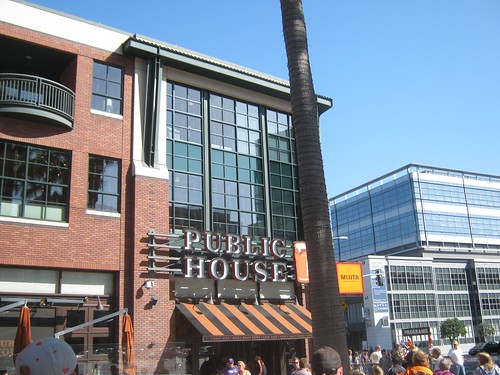 The Giants have had some good teams lately so open seats can be tough to find (+1), but the ushers have a pretty laid-back California attitude (+1) so trading up isn't an issue at all (+1). If you see an empty see after a few innings you shouldn't have much trouble snagging it (+1).

They sing "Take Me Out to the Ballgame," (+1) but no one seemed too interested in it. This is the first time I've been to a ballpark where a large number of people don't even stand during the stretch (-1). While they don't play it during the 7th inning, Journey's song "Lights" is usually played in the middle of the 8th. Steve Perry even performed it in the 8th inning during game 2 of the 2010 World Series (+1).

The former industrial park around AT&T has been revitalized by the addition of the park (+1) and there are a lot of restaurants to enjoy in the area and along the pier (+1). The walk along the pier will take you some great spots in San Fran so there are a lot of choices before and after the game (+1). The park is one of only a handful of parks on the water (+1) so it makes for a great walk (+1).