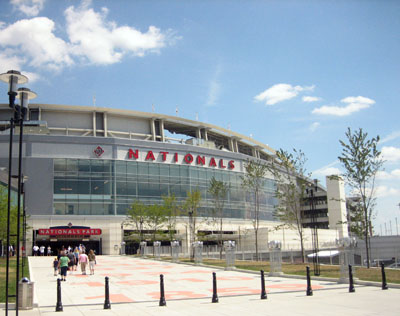 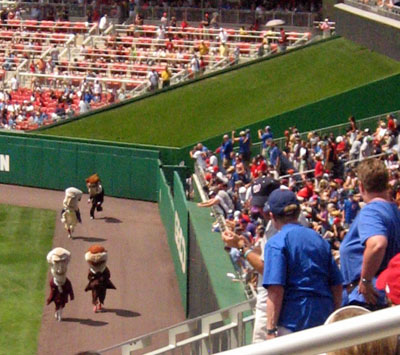 There wasn't too much parking around Nationals Park when I visited, but if you are willing to park more than a block or two away you can do it for incredibly cheap (+1). The Metro also has a stop a block away from the stadium (+1) so even with the lack of parking it is pretty easy to get to Nationals Park (+1).

Why are tickets to a Nationals game so expensive? I know they have a shiny new stadium, but when you are trying to build a fanbase having some of the most expensive tickets in baseball doesn't help matters (-1). The seats are okay. It doesn't have the intimate feel of older stadiums, but it isn't as cavernous as some newer stadiums (+1).

The outside of Nationals Park is pretty bland (-1). There is a lot of white and gray, which sort of fits with the modern architecture in D.C. (+1), but a more obvious nod to D.C. architecture would have been much nicer. There is some history of D.C. baseball outside (+1), but other than that there isn't much. The Navy Yard area will probably be built up in the coming years, but as of the inaugural season for Nationals Park it is pretty much a construction site.

There is plenty to do inside Nationals Park. The stadium is following the tradition of the ball mall started by parks like Comerica where you 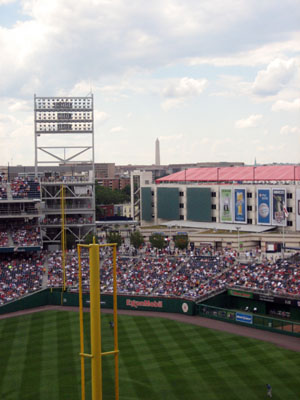 feel like you are going through a shopping mall as opposed to a ballgame (+1). The difference with Comerica is you can see the game from pretty much anywhere in the park while that isn't always the case at Nationals Park (-1). It would also have been great if there were better views of the awesome D.C. skyline. As it is you can see the Washington Monument from some parts of the stadium (+1), but you can only see the Capitol from one little corner (-1).

When Nationals Park was first built the scoreboard contained the largest HD screen in the world (+1). It is definitely the coolest aspect of the stadium and is by far the sharpest board in the majors (+1). It has a cool analog clock (+1) and the advertising doesn't overpower the board itself (+1). The out-of-town scoreboard shows everything you could ask for as well (+1).

There is a kids play area near the center field entrance with videogames (+1), skill challenges (+1), and other activities for older kids. There is also a play area for the younger set (+1). However, the play area is small and kids are rotated out if there is a line (-1). Kids can also run the bases after Sunday home games (+1).

There were so many Cubs fans at the game you would think you were at Wrigley Field. It will take some time to build a fanbase in D.C., but right now there are few fans at the games and the enthusiasm just isn't there (-1). 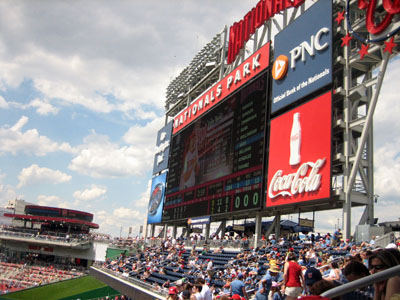 The ushers are pretty friendly (+1), but they are also pretty vigilant about checking tickets, especially in the lower levels (-1). With a park that I imagine is pretty empty if the Cubs aren't in town it would be nice if they let people trade up.

"Take Me Out" (+1) with a real organ (+1) and they follow with "Shout" for whatever reason. I'm not sure if that's going to be a tradition, but it is kind of weird even if the song is fun. The best tradition they have is the president's race where Abe, George, Teddy, and Thomas sprint in a nod to the sausage race at Miller Park (+1).

If you like construction sites you will love the area around Nationals Park (-1). I'm sure it will be nicer in the next few years, but as of the inaugural season it is pretty desolate (-1). I'll update this review the next time I visit.