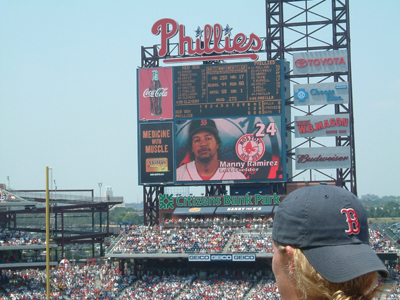 There is so much parking around Citizens Bank Park it is unbelievable (+1). It could be because it is in the "Sports Complex" area of Philly and there are 3 other stadiums/arenas in the area, but you definitely won't have trouble driving. You could also take the train (+1), and it will drop you off about one block from the stadium stadium (+1). The parking is surprisingly reasonable as well (+1), which is a shock for a city as big as Philly.

Tickets to a Phillies game used to be reasonable (+1), but since the Phillies went to back-to-back World Series in 2008 and 2009 they are now among the top five most expensive tickets in baseball (-1). The seats are fairly close to the field (+1), but you don't get the intimate feeling like you do at parks like PNC and Wrigley (-1). Some of the seats are at awkward angles as well (-1), but nowhere near as bad as Fenway (+1).

There are trees outside (+1), which is nice, but there just doesn't seem to be any character to the area (-1). The red brick and steel feels more like a new mini-mansion than it does a classic baseball stadium (-1). There are a few statues of Philly greats outside the stadium (+1), but other than that it is pretty forgettable.

The inside of the stadium continues the red brick and steel look, but for some reason goes with blue seats (-1). The stadium has a lot of quirks on the inside, though, that definitely add to its character (+1). The bullpens are stacked one on top of the other (+1), which is a cool feature not duplicated anywhere else that I know of (+1). You can also walk the entire concourse and still see the game (+1). They even have little shelves behind the seating areas where you can put your food if you want to stand and watch the game for a little bit (+1). Great for the standing-room only crowd.

The scoreboard is big (+1), the video is clear (+1), and it isn't cluttered with many ads (+1). The steel continues behind the scoreboard which fits the stadium (+1), but it still doesn't look like a classic baseball scoreboard (-1). The out-of-town board shows every game and gives you all the pertinent information (+1). Overall, it's one of the best in baseball (+1).

The Phanatic Phun Zone has a play area for kids 8 and under (+1) as well as a smaller play area for kids 2 and younger (+1). In addition to the play area, there are games the kids can play in the Phun Zone (+1). As a bonus, kids 14 and under wearing Phillies gear are randomly selected each game to appear on the field during pre-game announcements (+1). 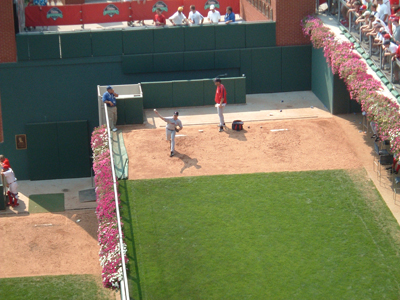 Philadelphia fans know what they're talking about (+1), but they can be brutal (+1). I didn't hear too much trash talking of the Red Sox during the game, but the Phillies were playing so bad that the fans really let the boos fly. I'm all for booing a player who isn't giving his best (see Milton Bradley), but I think Philly fans use the word "boo" as a greeting (+1).

The ushers were surprisingly nice (+1), but the stadium was packed (+1) so it was tough to tell if trading up was a possibility. They don't have ushers guarding every aisle like some stadiums (+1) so I imagine it wouldn't be a problem (+1).

They sing "Take Me Out" (+1) and they use a real organ (+1)! Hooray! There isn't anything done afterwards that distinguishes the stretch from other places (-1), but a real organ gets major points (+2).

Citizens Bank Park is located in the "Sports Complex" area of Philly, which means unless you have a concert or another sporting event to go to there is nothing else to do around it (-1). Downtown Philly is great (+1), but you have to travel a little way to get there (-1).