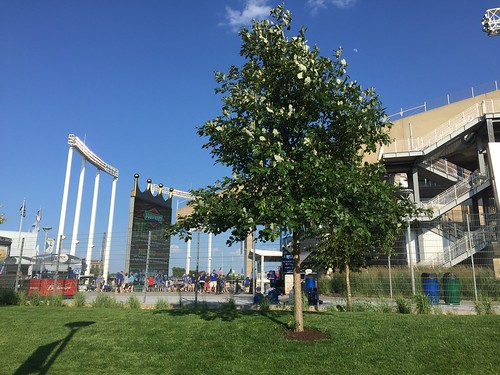 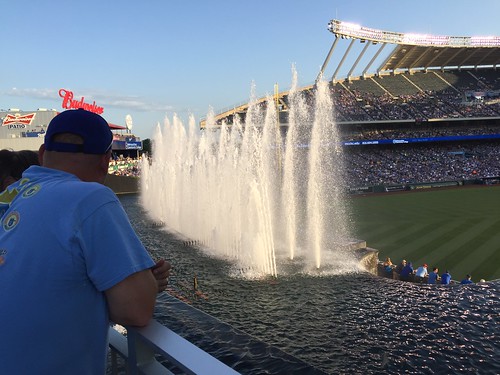 There is a lot of parking around the stadium (+1), and it's one of the easiest stadiums to drive to in the majors (+1). The parking is also fairly reasonable (+1). There is also a bus stop near the stadium, but it stops running for a few hours around 11:30pm (-1) so you could possibly have to leave the game early for games that go into extra innings. It's only $3 round trip, though, so it's a pretty good deal (+1).

Tickets at Kauffman are fairly inexpensive (+1), and they typically offer games with $10 tickets (+1). There are very few obstructed view seats, and that's fantastic given the park offers good views from just about anywhere (+1). After a recent renovation, the Royals added seats by the outfield fountains and the nearby fountains can definitely cool you down on a hot Kansas City night (+1).

The exterior of Kauffman is concrete...and more concrete (-1). There really isn't anything picturesque about it (-1). One cool feature is that you can see into the park from the outfield (+1). The stadium also gets a point for not being a cookie-cutter stadium when it was built during an area of multipurpose or cookie-cutter stadiums such as Busch Stadium and Oakland's stadium (+1). 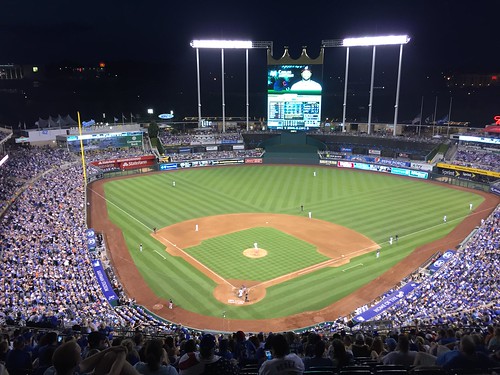 You can still see the game from a good majority of the concourse, which is rare for an older stadium (+1). The blue seats also fit the Royals aesthetic quite well (+1). The waterfalls (+1) and fountains (+1) in the outfield are what really give Kauffman Stadium its charm, though. It's a feature that's been copied by some parks such as Comerica and Angel Stadium, but none of the newer parks come close to the original at Kauffman (+1).

The scoreboard at Kauffman is the most unique in baseball (+1). Instead of the typical widescreen scoreboard, the scoreboard at Kauffman is more vertical than horizontal, and has a crown on top (+1). It definitely fits the stadium design (+1) and does a surprisingly good job of showing a lot of stats (+1). The video was upgraded in 2009 so the board doesn't show it's age (+1). They do have out-of-town scores in the outfield (+1), but you can only see about four games at a time (-1).

There is a lot for kids to do at Kauffman. They have a carousel (+1), playground (+1), skills challenges (+1), and even mini golf (+2)! The only problem is everything except the playground costs money (-1). The carousel is pretty cool, though, as all of the horses are decked out in Royals gear (+1). 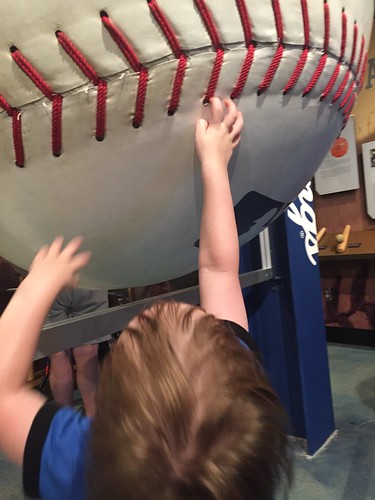 While I've only been to weeknight games, they were in the summer and the stadium wasn't very full (-1). That's disappointing as the team had been to two World Series recently. The fans who attended, though, seemed knowledgeable (+1) and into the game (+1). They also have Midwestern niceness about them, which is always a plus (+1).

The ushers are overly friendly (+1), and are just as knowledgeable about baseball as the fans (+1). One benefit of lower attendance is there are plenty of empty seats. The ushers don't seem to mind at all if you trade in your $10 nosebleed seat (+1) for something within spitting distance of the grass (+1). There is even standing room near the fountains where you can cool off for an inning or two (+1).

The Royals play the traditional "Take Me Out" in the seventh inning (+1), and fans seem pretty into it (+1). The Royals don't really have a local touch to the stretch, though (-1).