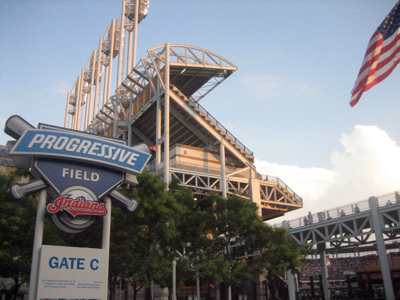 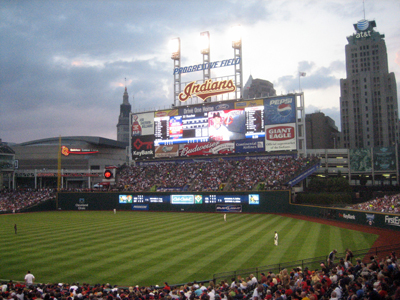 There is a lot of parking around Progressive Field (+1), and even with Quicken Loans Arena across the street you can easily find a space (+1). You'll still pay quite a bit even if you parked blocks away (-1), though, since the field is in downtown Cleveland. You can also take the train (+1), which will drop you off just a few blocks from the park so that could be a good option (+1).

Cleveland's tickets are below the league average (+1), even with the fact that the team has been pretty good over the past few years. They don't have a crazy pricing structure like some teams (+1), but they do charge extra a little more for some games like weekends. The seats themselves leave a lot to be desired. Most seats are really far away from the action (-1) and, like at Fenway, the seats can be at weird angles so you have to turn your neck to see home plate (-1). Of all the things to emulate about Fenway why would you choose the seats?

There is an area outside the stadium where you can see the game (+1), which is a nice trend that has been used by a few new stadiums including Comerica Park and the knothole at Wrigley. There is a statue of Bob Feller outside (+1), but other than that the stadium doesn't really have anything to distinguish itself from other parks.

The first thing you will notice inside Progressive Field is the luxury suites, which take up an inordinate amount of space (-1). The park has a nice Hall of Fame area with plaques of a lot of Cleveland greats (+1). There is also a picnic area in center field (+1) and the fact that you 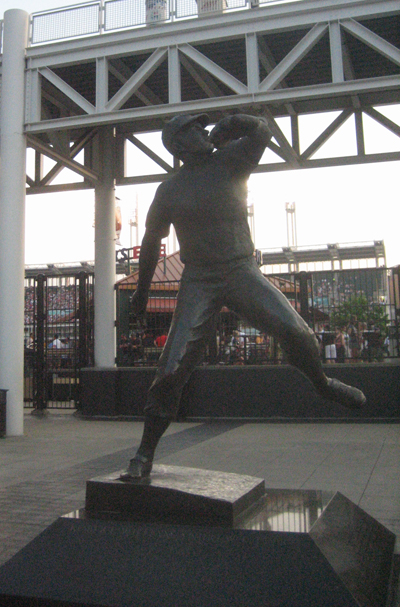 can walk almost the entire concourse and still see the game is always worth some points (+1). The interior architecture doesn't really stand out, but you do get a nice view of downtown Cleveland (+1).

The scoreboard at Progressive Field is huge (+1), but most of the space is taken up by the ads around the perimeter (-1). The video itself is not bad for an older modern park, and it does give you all the information you would want (+1). The out-of-town scoreboard is on the fence below the main scoreboard (+1), but it doesn't show all the games at one time so you have to wait to see the game you are looking for (-1). There is also no touch of classic baseball in either scoreboard (-1).

The Indians have a Family Deck where kids can play on a mini baseball field (+1), slide down a two-story slide (+1), ride around in mini cars, or participate in baseball skills challenges (+1). You can't see the game from the Family Deck, though (-1). Like most teams, the Indians allow kids to run hte bases after Sunday home games (+1).

The Indians went through a long period of losing that seems to make fans more knowledgeable (+1) for whatever reason (see fans at Fenway and Wrigley). They didn't seem too into the game I went to, but that could have been because the Indians had just went through a fire sale at the trade deadline and traded C.C. Sabathia to the Brewers. The fans at least knew their baseball (+1) even if there wasn't much to cheer in the 11-4 loss.

The ushers at Progressive Field are almost worse than those at Yankee Stadium. They will stare you down if you even have a thought of sneaking into some better seats (-1). Trading up at Progressive Field is probably harder than any other stadium in baseball that doesn't regularly sell out (-1).

During the stretch at Progressive Field they play "Take Me Out" (+1). During the middle of the eighth they play "Hang on Sloopyquot; to honor Ohio State University (+1). Fans even spell out O-H-I-O during the song (+1).

Progressive Field is right in the heart of downtown Cleveland (+3) so there is plenty to do around the stadium. You could even take in a concert at Quicken Loans Arena which is right across the street (+1).